I’m sure I’ve done something similar here before but I wanted to share this simple supper that I made last week.  It’s full of flavour, economical and easy to pimp up with some extra sides and sauces. 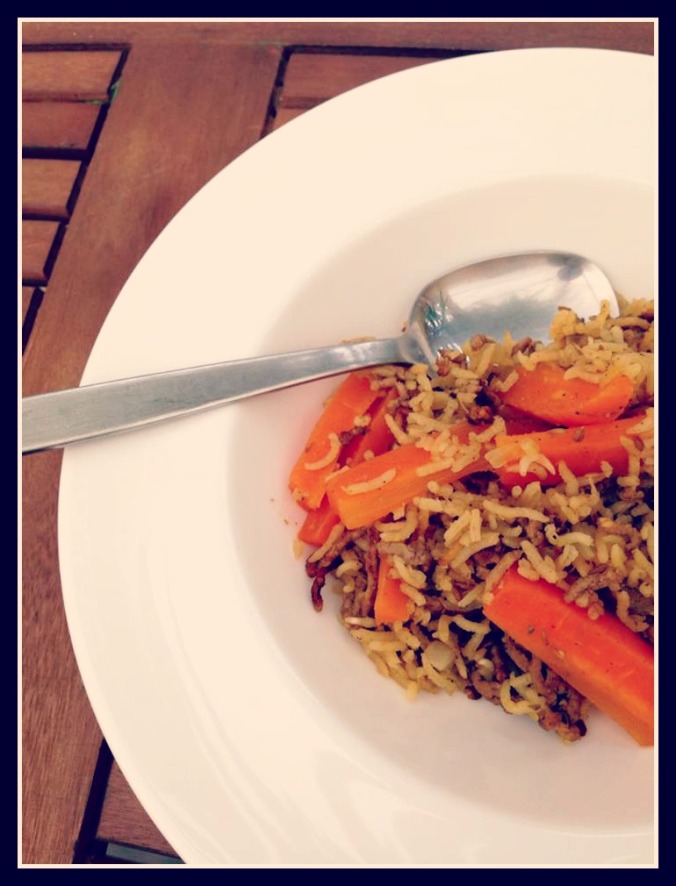 Soften the onions until translucent then put to one side.   Fry lamb mince in heavy bottomed pot until browned and crispy, add softened onions, spices and fry for a minute.  Then add rice and carrots and stir well so that the rice is coated in the oil.   Add the water stock  and cover with lid.  Cook for about 14 min, turn the heat off and let it stand for five minutes.  Open the pot and you should be engulfed in a steamy, lightly spiced cloud, mmmm, fluff gently and season to taste.  Serve on its own, with yoghurt, chilli sauce, chutney or as part of a feast.

What are you having for dinner tonight?

Me? Well I was getting a bit sick of this poor lonesome blog giving me guilt trips so after spending most of my recent spare time watching YouTube constantly (oh my Sprinkle of Glitter
you are truly addictive!) I decided to just jump in and do a vlog, eek, please be gentle, here it is…

I’m attempting to post this from my iPad so not sure how to embed the video from here, I’ll have a tinker on the pooter later.

This is a quick and simple recipe I knocked up for lunch, the chilli powder actually combines chilli (duh), cumin, oregano and garlic and gives these fries a spicy, moreish flavour which makes them almost impossible to resist, I thought I was knocking up enough for two but ended up eating  the lot. 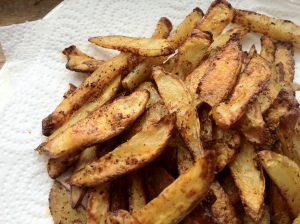 Pre heat your oven to 200 and get out a big tray.  Slice your potatoes (skin on) in to fat match sticks, well you could do wedges, super fine fries or whatever but i think fat match sticks worked well for a good crisp chip.  Chuck the tatties in large roasting tray then slug on a tablespoon or so of oil, mix with your hands then sprinkle liberally with chilli powder and salt then mix some more.

Shove in the oven for about 25 min until hot and crispy then serve with sour cream and sweet chilli.  Oh yeah. 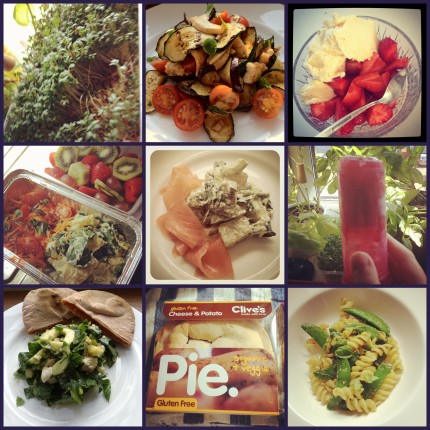 Clockwise from top left: the ever amazing cress (sewn by my even more amazing 3 yo on cotton wool, can’t beat it), a griddled courgette, aubergine, mozarella and tomato salad; good old strawberries and ice cream; pesto and spinach potato salad with carrot, tomatoes and fruit salad for al fresco eating on the grass outside our flat, more potato salad with yummy smoked salmon; home made ice pops – a daily habit at the mo; feta, cucumber, spinach and mint salad with the new Genius tomato and basil pittas – approved, very scrummy cheese and potato pie from Clives at the Allergy and Free From show; and my lazy dinner du jour of pasta, pesto and sugar snap peas – I know I’m a real gourmet!

I’ve got 2 Cadbury’s Creme Eggs and a packet of Minstrels in the fridge and I’m feeling guilty so thought I’d knock up a healthy veggie curry for lunch that could double up as one of my weekday packed lunches leaving enough sauce to spare to make something quick and spicy for tea in the week – multi tasking food, you see that?  What more do you want? Anyway by my wonderful diet logic if I eat one healthy meal that means I can deffo have eaten at least one of those creme eggs by the end of the day, it’s a simple balanced equation right?

This curry is quick and simple to knock up and is pretty much made with store cupboard ingredients, in fact if you don’t have chickpeas, a tin of beans, some lentils or whatever veggies you have lurking about in your fridge would all make welcome additions to this spicy sauce.

So here we go…

Soften the onions in a pot with a tablespoon of oil until translucent, add the ginger and garlic and fry for a minute or two.  Add the spices and let them fry for a further minute then add the tomatoes and let it bubble down for about 5 minutes, stirring now and then to prevent it from catching.  Add the chutney, salt and  coconut milk, then blitz with a hand blender (or in a machine), return to the heat and bring to the simmer.  This is where you can now syphon off half the sauce and stash in the fridge or freezer until a later date. Now add the drained and rinsed chick peas to the pot.  Simmer the chickpeas for a further couple of minutes until everything is heated through then serve.  I served mine with a gluten free pitta for lunch and I’ll be having the other portion for lunch on Monday with a bit of tonight’s left over roast chicken dinner stirred in, I love a bit of leftovers don’t you? 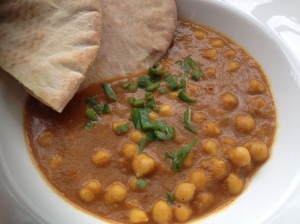 I’ve been dreaming about gluten-free tortillas or wraps since I stopped eating gluten, they are somewhat the holy grail of gluten-free finds and until recently I didn’t think anyone manufactured any good ones.  However, it seems there is a saviour, Saara at The Gluten Free Student Cookbook has found some at the Mex Grocer and she also had a go at making some here.  These looked great and I shall be certainly ordering some of the Mex Grocer ones for my freezer but after reading Thomasina Miers’ Mexican Food Made Simple over the last week I had ambitions to go authentic and cook some from scratch.  Now you’ll need to source some ‘Masa Harina’ flour first, not too difficult it would seem, it’s of course readily available online but also stocked at major supermarkets (I found mine in Sainsburys).  It’s a pretty simple recipe, I followed the one on the back of the packet which just involves adding hot water, Thomasina adds some oil to hers  and in hindsight I would recommend a glug into the mix to improve the flexibility of the finished tortilla.  The ones I made were not something you could easily use for a fajita or wrap but made a great flat bread type accompaniment to a chilli and certainly would work well in wedges, refried and served with guacamole, salsa, sour cream and cheese.

The chilli was mostly my own invention, whilst I nicked the idea for  the admission of chorizo from Thomasina the rest was a bit of this and bit of that from my imagination (oh yeah and a quick consultary call to my Dad).

For the tortillas (makes about 4, double, or triple for more):

Brown the mince and chorizo in a large pot.  Add the onion, celery and garlic and fry gently for a few minutes until tender.  Add the chilli powder and paprika and fry for a minute or so then add the tomatoes and passata and top with half a can of water.  Bring up to the simmer and add the vinegar, ketchup, syrup and salt and pepper.  Simmer with the lid on for about 30 min then add the kidney beans and cook on a low heat for a further 15 min.  Chuck in the chocolate, stir, then set aside until your tortillas are ready.

Mix the corn flour, salt, pepper, oil and hand hot water in a large bowl and bring together into a soft, clay like ball.  Cover and leave to rest for 15-30 min.  Take a golf ball sized chunk and roll in to a ball in your hands then place between the layers of a plastic sandwich bag.  Now this is where in an ideal world you would be a good Mexican cook and have a tortilla press to make fine looking circles with no cracks, however I’m not Mexican and I’m not very good either so instead I used a good old fashioned British rolling pin and made round (ish), rustic circles, and when I say circles you can use your imagination there as well.  You want to aim for about 2mm thick but I say experimentation is the best way forward and find your way through trial and error, the odd snack or test case whilst cooking never did anyone any harm.  Heat a dry pan and cook your tortillas on a high heat for a couple of minutes each side until slightly puffed and charred. Keep your tortillas warm in a tea towel in a low oven whilst you assemble the rest of the meal.

I served my chilli in a bowl topped with a rough guacamole (chopped avocado, chilli and lime), sour cream, and grated cheese with the tortillas on the side to dip, wrap, mop up and devour.

So a traditional Irish recipe is in order I think.  This soda bread is gluten free (of course) and flavoured with spring onions, or scallions as I keep being corrected. I didn’t have any buttermilk for this recipe so I’ve made my own version combining yoghurt and milk which works just as well and may even be a bit thriftier.

If you are looking for other Irish food inspiration then you could try these delicious gluten free potato farls here, otherwise…

Pre-heat the oven to 200 degrees (fan) and oil a baking tray.

Mix all the dry ingredients in a large bowl and rub in the butter. Add the spring onions and mix.   Whisk up the egg, yoghurt and milk mixture then stir into the dry ingredients.  Turn out the dough onto a well floured board, the mix will be quite sticky so be generous with your dusting.  Knead the mix for a couple of minutes then form in to a large ball and plop onto the oiled tray.  Cut a deep (over half way) cross through the centre, brush with milk and dust with flour. 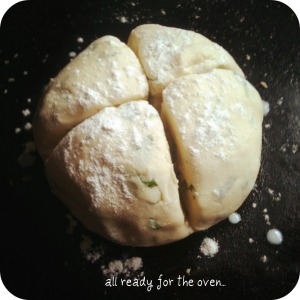 Bake in the oven for about 30/40 minutes, until golden and hollow sounding when you knock its bottom.

Serve with butter, cheese and chutney for tea or toasted the next day for breakfast.

What Isla Ate on…

Error: Twitter did not respond. Please wait a few minutes and refresh this page.

There was an error retrieving images from Instagram. An attempt will be remade in a few minutes.